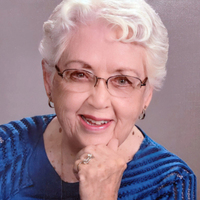 A prayer service will be held from 7:00 to 8:00p.m., Thursday September, 29 at St. George’s Episcopal Memorial Church.

Jane was born February 2, 1927 to Frederick William and Hazel (Morrow) Clapp at Grace Hospital in Detroit, Michigan. Due to her father’s career Jane spent part of each year in Detroit, Michigan and part in Excelsior, Minnesota. She attended public schools during her primary grades. In 1945, Jane graduated from St. Mary’s School, Faribault, MN. She attended Western College for Women in Oxford, Ohio her freshman year. Jane then transferred to Carleton College in Northfield, MN where she graduated with a Bachelor of Science Degree in Economics.  Jane also attended a business school in Minneapolis and was then hired by Pontiac Motors in the regional parts division. She worked there until her first child was born.

On June 27, 1953, she married Roy Salem Towne at the Cathedral Church of St. Mark in Minneapolis. Roy and Jane were fortunate enough to be married for 55 years.  They lived in St. Louis Park, MN until 1957 when Roy moved to Bismarck where he opened an office for John G. Kinnard & Company. During the 1970’s, Jane assisted her husband as a secretary in his office.

Jane was a long-time member of St. George’s Episcopal Church. Church involvement and church family were very important to Jane.  So, in her early 70’s, Jane returned to school at the University of Mary to study in the area theology. On November 23, 2001, Jane was ordained as a Deacon in the Episcopal Church. She enjoyed her ministry to shut ins and participation in the services.

Jane was an active member of several organizations: P.E.O., Daughters of the American Revolution, Fortnightly, Book Club, Eastern Star and NOW.  She was also a board member in the following organizations: Police Youth Bureau, The Awareness House, and YMCA. At an early age, Jane learned how to play Bridge. She loved the game and played it almost until her death.

Jane was preceded in death by her husband, Roy; her parents; and grandsons, Weston Williams Towne and Shawn Liston Towne and sister-in-law, Matilda (Towne) Rupp.

Memorials may be made to St. George’s Episcopal Church, God’s Child Project and Scottish Rite Speech Therapy Center for Children.

To order memorial trees or send flowers to the family in memory of Jane Towne, please visit our flower store.