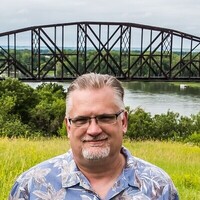 Jason William Fried, 47, Bismarck, passed away unexpectedly on July 8, 2021, after a brief hospitalization. Funeral services will be held 1 p.m. Friday, July 16, at First Lutheran Church, 800 N Seventh St., Bismarck, with Rev. Allen Wagner presiding over the service. Cremation has taken place. Visitation will held one-hour prior to the service at the church. A service livestream will be available at the link: https://www.youtube.com/watch?v=6X3bHxvbmJo

Burial will be held at Fairview Cemetery, Bismarck, following the service.

Jason was born on January 19, 1974, to Dennis and Judy (Kershaw) Fried. He graduated from Century High School and attended Bismarck State College. Currently, he worked for Farmer’s Union Insurance Company as an insurance adjuster. He was also the owner of Bismarck Prop Works and had expanded this business to include Bismarck Welding and Dakota Trailers after his dad retired.

On October 24, 2014, Jason and Lynn were married in a small service in Las Vegas, Nevada, after he surprised Lynn by flying her oldest daughter into town, an engagement ring and asking her to marry him the evening before.

Jason was an avid car, motorcycle and boating enthusiast. You could often find him cruising around in various sports cars, riding around on his Harley, or relaxing on the river in his boat and speed never really was a concern for him. As a businessman, Jason loved to wheel and deal.

Jason was greeted in Heaven by his grandparents, Dalbert and Aune Kershaw and William and Tillie Fried; mother-in-law, Rita Harris; and several aunts and uncles.

Our family would like to extend our appreciation to the wonderful ER and ICU nurses and doctors at CHI St. Alexius for the wonderful care and great compassion they gave so freely to Jason and our family during his stay there.

To order memorial trees or send flowers to the family in memory of Jason Fried, please visit our flower store.