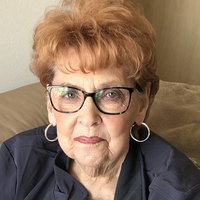 Jean Coleman, 86, Baldwin, passed away April 19, 2021 from a short battle with cancer.  Funeral services will be held 1 p.m. Friday, April 23 at Zion Lutheran Church, 413 E Ave D, Bismarck.  A livestream link through YouTube and Facebook of the funeral service can be found at www.zionbismarck.org.

Jean will be laid to rest in the Baldwin Cemetery, across the road from the farm she called home for 62 years.

She was born in Turtle Lake on June 20, 1934 and was the daughter of Emma (Keel) Fischer and Frank M. Fischer, who passed away three months before Jean was born. Jean graduated from Turtle Lake High School in 1953 and moved to Bismarck the day after graduation.  She started a job with the ND Department of Instruction three days after moving to Bismarck. Jean later worked with the Gold Seal Company and competed in the Miss Bismarck Pageant being crowned Miss Congeniality in 1956.  Jean also sang in the Caroline Singers, was a member of the Beta Sigma Phi Sorority for over 50 years and had the honor of being crowned the Beta Sigma Phi Snowball Queen in 1957.

In September 1958, Jean married Dale Coleman. They spent the next 62 years raising a family while farming and ranching a third-generation family farm in Baldwin. Jean always said her greatest accomplishments were her four children and their families! Her family might add that she was famous for her “Ruth Rolls”!

Jean had a lifelong love of music and performance, singing for weddings, funerals, family gatherings and church. Jean was the music teacher for Baldwin and Naughton Elementary Schools and frequently taught Sunday School and Vacation Bible School music at Zion Lutheran Church in Bismarck.

Jean was employed by Herberger’s Department Store for 11 years until she retired in 1999.  She loved being around people and had many friends.

Wherever Jean went, she made an impact on the people she encountered even in her last hours.  She was a person that everyone loved and loved being around.

Her smile, love of life, sense of humor, love of her family and the love of her Lord were evident. All who knew Jean knew this about her.  Everyone who knew our Mother knew she was a classy lady!

Jean was preceded in death by her parents, Frank and Emma Fischer; and sisters, Violet Houstman, Annabelle Broeckel and Joyce Hieb.

To order memorial trees or send flowers to the family in memory of Jean Coleman, please visit our flower store.