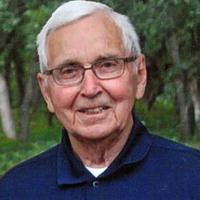 Jerome Albert Jaeger, holding his rosary beads in his hands, peacefully passed into eternal life while at his home with his family by his side on June 22, 2021.  He was a man of deep and abiding faith in his Lord and Savior Jesus Christ.  He was a humble and thoughtful man as he lived his entire life as an example to all as a faithful and devoted servant of his church. Faith, family, humility and integrity were the cornerstones of Jerome’s life here on earth.

Jerome was born November 25, 1933, in Rugby.  He was the youngest child of 13 children born to Lawrence and Eva Jaeger.  Jerome was reared on the family farm near Fillmore where he attended his twelve years of school.

Jerome met the love of his life, Anastasia Arnold, in 1955 at a dance.  They married on September 16, 1957, at Saint Boniface Catholic Church in Esmond and they celebrated 64 wonderful years together.  After their marriage, they lived on the family farm until 1959 when they moved to Minot where they resided for 53 years eventually moving to Bismarck to be close to family.  Jerome attended Minot Business College and earned a degree in Business Administration.  He was employed at Souris River Telephone Company his entire professional career.  Jerome held several office positions and retired in 1995 as the Human Resource Director.

Jerome’s enduring faith and his love for the Lord were evident in his significant contributions to his faith community.  He was a loyal, generous and sustaining supporter of Catholic education. One of his proudest accomplishments was that all of his children received an enriching education at Bishop Ryan High School. He served as a member of Bishop Ryan High School board for several years, a member of the Minot Catholic School Foundation, and a member of the Minot Catholic Schools Board.  Jerome was also a devoted member of Saint John’s the Apostle Church in Minot where he served on the parish board for many years.  He also served on the Hogan Heritage Society Board of Regents, he was a member of Kiwanis Service Club, a member of the Knights of Columbus and a proud and honorable member of the 4th Degree Knights.  His passion to support, build and grow the faith in his church community and in particular, Catholic Schools was immeasurable.

He enjoyed many things in life, especially a game of golf or cards, following the stock market and spending time with grandkids and great-grandkids. His presence will be greatly missed. He will live on in our hearts forever.

Memorials may be made to  Bishop Ryan High School and St. Mary’s Catholic Schools.

“Jesus said to him, ‘I am the way, and the truth, and the life. No one comes to the Father except through me.” John 14:6

To order memorial trees or send flowers to the family in memory of Jerome Jaeger, please visit our flower store.