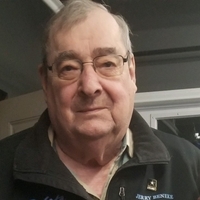 To watch the livestream of the service at the Veterans Cemetery on Monday at 9:00 am, watch below:

Jerome “Jerry” E. Beneke, 74, Bismarck, passed away Dec. 8, 2020, at Sanford Health. Funeral services will be held at 11 a.m., Saturday, Dec. 12, at Parkway Funeral Service, 2330 Tyler Pkwy, Bismarck. Visitation will be held one hour prior at the funeral home. Both the funeral and burial will be live streamed on the funeral home website.

Jerome was born Oct. 12, 1946, in Bismarck to Edgar and Caroline (Toepke) Beneke. He was raised in Judson and New Salem graduating from New Salem High School in 1964. In high school he played American Legion Baseball and was coached by his father, who is in the ND Amateur Baseball Hall of Fame, which Jerry took great pride in!  Following graduation he attended Bismarck Junior College and worked as a salesman at Browns shoe store in downtown Bismarck. He transferred to Kansas where he worked for a short time before returning to Bismarck to work at Montgomery Wards. In 1967, Jerry enlisted in the U.S. Army Reserves and served for six years before being honorably discharged in 1973.

Radio sales with KFYR and KBMR filled most of Jerry’s career.  Most recently he found his dream job with Dakota Country Magazine and Bill and Jon and Karen! Jerry was a member of the Elks Club, American Legion, Eagle’s Club, Moose Club, AmVets and was in a bowling league for years.

Hunting, deer camp and a country drive meant a lot to Jerry. He was proud of his grandsons being involved in baseball, football, wrestling, hunting and fishing.

Those most honored to share in his life are his son, Dion (Karla), Mandan; grandchildren, Kadin and Kellen; siblings, Jim (Sally), Bismarck, and Janelle (John) Bitz, Bismarck; six nieces and their spouses; and 14 great-nieces and great-nephews.

He was preceded in death by his parents, Edgar and Caroline.

In lieu of flowers, memorials may be made to the Great American Bike Race-Sanford Health Foundation, the North Dakota Veterans Cemetery or a charity of the donor’s choice.

To order memorial trees or send flowers to the family in memory of Jerome "Jerry" Beneke, please visit our flower store.