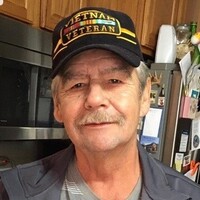 Jerry Bay, 72, Bismarck, passed away on Saturday, September 25, 2021 at Sanford Hospital, with his wife by his side.  Burial with Military Honors will take place on Friday, October 1, 2021, at 11:00 am, at the North Dakota Veterans Cemetery.

Jerry was born on May 24, 1949.  He and his two brothers were adopted by Fred and Norah (Martin) Bay, in August of 1964. They were raised in Lark, ND and Jerry attended school in Carson.

In January of 1969, Jerry entered the United States Army and served during Vietnam.  During his time, he received the purple heart, along with many other service medals.  He was honorably discharged in January of 1971.  While on leave in 1970, he married Marilyn Havens.  Together they had three boys, Douglas, David and Donald.

Throughout his years, he was skilled in many different occupations.  He farmed, worked as a mechanic and a machinist, worked in the oil fields and other trades.  He loved being outdoors and fishing was one of his favorite ways to spend his time, along with walking his dog Jarvis and spending time with his cat, Houdini.  He also liked to hunt and he made diamond willow canes and walking sticks which he enjoyed gifting to those who could use them.  He was a member of the VFW.

He is survived by his wife, Marilyn, Bismarck; sons, David (Shannon), Minot and Donald (Doreen), Thorton, CO; grandchildren and great grandchildren; brother, Mitchell Bay, Mexico and a number of nieces and nephews.  He was preceded in death by his son, Douglas; parents, Fred and Norah and brother, John.

To order memorial trees or send flowers to the family in memory of Jerry Lee Bay, please visit our flower store.