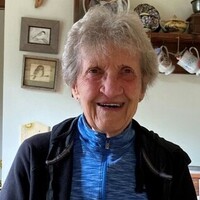 A livestream of the Funeral Mass will be available on the church's Facebook page: https://www.facebook.com/CorpusBismarck/

A vigil will be held at Parkway Funeral Service, 2330 Tyler Pkwy, Bismarck, at 7 p.m. Thursday, February 17.  Mass of Christian burial will be at Corpus Christi Parish Church, at 10 a.m. Friday, February 18.  Burial will follow at North Dakota Veterans Cemetery, rural Mandan, south on ND Highway 1806, at 1 p.m. Both the vigil and the Funeral Mass will be streamed at the websites for their respective locations.

Because our beloved Joan died of Covid-19 and because of an expectation of medical issues for some attendees, the family asks that folks who plan to attend the vigil and the funeral mass wear masks.  These will be provided and available at the entrances to all venues.

Born at her maternal grandparents' home in Hazelton on August 26, 1929, Joan was the eldest of the five sons and three daughters of Earl and Hazel Weiss.  Earl, originally from a farming family in Greene, Iowa, met his future wife, Hazel Baker, while attending a business college in Mankato, Minnesota. They married in 1928 and took up residence on the John and Katherine (Chalfin) Baker farmstead seven miles northwest of Hazelton on the eve of the Great Depression.

By this time, John Baker's farm was prosperous enough that he also owned a house in town as a place for his children to attend school and as a convenient landing place for travel.  John and Katherine's only son, Joe, died in the 1918 influenza pandemic, another good reason to welcome Earl as a resident son-in-law.

The family, including Joan, lived with the Bakers for five years before the crushing blow of the Depression forced Earl to search for work in Bismarck, eventually found with the North Dakota Highway Department through an FDR initiated program and, somewhat later and more permanently, as a brakeman for the Northern Pacific Railway.  The Bakers ultimately lost their farm during the Depression, and Joan would always say that she thought her grandfather died, in 1939,  of heartbreak.

The Weiss family for much of Joan's early life certainly qualified for the description, "dirt poor."  Yet Joan always spoke of the good times they had, too.  She passed on stories from her aunts and from her earliest years at the farm amid Prohibition, which ended in 1933.  Although it's unlikely that Joan participated in the gatherings, she lived among the very social Bakers and Weisses who were celebrated for hosting dance parties that almost certainly violated the Prohibition's spirit.  Thus, the frugality and ability to stretch available resources, traits shared with many others formed in those Depression years, were very much a feature of Joan's character for the rest of her life, but they were leavened by that dollop of celebration and sociability, too.

After her grandfather's death, Joan's grandmother joined the Weiss family in Bismarck; by the time of her grandmother's death in 1952, ten people were living in a series of two-bedroom, single bathroom (often shared with another family) flats in the residential areas north and east of St. Mary's Catholic Church.  Like each of her siblings, Joan attended St. Mary's Catholic School throughout her elementary and high school years, graduating in 1947.  Many of those high school classmates stayed close friends, even across the many years of her travels between 1952 and 1970.

And here's how that travel started: After high school, Joan had hoped to begin studies leading to a career in nursing, as a fulfillment of her longstanding inclination to help others.  She was denied entry into nursing school because of a slight speech impediment and got secretarial and accounting work in a Bismarck creamery, where she met and became close friends with Maxine Fricke.  Maxine told Joan about, and very likely showed Joan pictures of, her brother Neil who had joined the Army in 1948 and was stationed with the occupation forces in Germany.  At Maxine's urging, Joan began a correspondence; Neil always joked that the very first picture Joan sent to him after they had exchanged a few letters was a picture of her in a bathing suit.  Although such a picture does exist, hearers of Neil's tale tend to doubt that it was the first.  But what is true is that for the rest of his life Neil carried in his wallet a picture sent by Joan during the correspondence.

The courtship begun in those letters between North Dakota and Germany kindled the longest and deepest devotion of both of their lives.  That kindling took fire when they finally met in 1952 during Neil's first home leave.   That meeting resulted in their marriage six weeks later on May 22, 1952, at St. Mary's Church.  Not without resistance!  Joan's father thought six weeks was way too fast and he was suspicious of the reputation of these soldiers, especially the young handsome sort that Neil was.  Besides, he wasn't Catholic.  And this is another touchstone of Joan's character: when she made up her mind, she was pretty much indomitable.  She married that man, joined him in Germany and, except for those times when he was stationed overseas in South Korea and later in Vietnam, stayed by his side with their growing family for just shy of 50 years.  Neil died, almost exactly 20 years before Joan, from complications of leukemia on March 22, 2002.

Neil and Joan had six sons together, beginning with the oldest, Neil, born in Germany.  With that first birth began the pattern that became a running joke in the family of having a new son at each posting: Tom at Ft. Leonard Wood, MO; Scott at Vermillion, SD; Wayne in Bismarck, ND when Neil went to Korea; Steve back at Ft. Leonard Wood after Neil's return; Joe in Hawai'i.  The joke ended with Joe's birth, the last of the Fricke sons.  Ever faithful to their identity as North Dakotans, an identity that they instilled in their sons too, the family returned to Bismarck after Neil's retirement from the Army in 1970.

Joan and Neil took great pride in the accomplishments of their sons; they were mostly tolerant of their wild years and their raucous senses of humor (which, full disclosure, Joan largely shared; each of her sons remembers many private and public moments of her pure joy and wonderful laughter).  They took special delight in the daughters-in-law that began to enter the family, saying that they finally got their daughters after all.  And, of course, the grandchildren that began to arrive were doted on.  She apologized to one of her sons, as she lay in the hospital with her final illness, saying she was sorry she would miss sending cards to some grandchildren with soon-arriving birthdays.  This was pure Joan, always thinking of others even alongside her strong will and firm sense of who she was.

This account is already long but needs a few more things.  Joan discovered her talents as an artist in her later years when she began painting pictures of birds, flowers, and landscapes.  She had always been a remarkably precise seamstress from the early years of building her family, when she accommodated their tight budget by making clothes and modifying hand-me-downs for her sons; she was an accomplished quilter, too.  She loved birds and birdsong and kept many species well-fed with the feeders outside her kitchen window.  She loved to read, averaging about a book a week in her later years.  And as long as she was able, she was a committed cross-country skier, hiker, and walker on Bismarck's trails.

Even after Neil's death, she never moved from the house that she bought on her own, at Neil's urging when he was in Vietnam, in case anything would happen to him.  That was in 1966.  The house was rented for a few years before Neil's retirement, waiting for the family to move back in after life in the Army.  Joan valued her independence and dreaded the thought of decline; she made the small changes in the house that extended her ability to stay there.  And even in this last winter of her long life before contracting Covid-19, she was seen outside wielding her snow shovel.

Joan was a wonder.  All who knew her -- her extended and near family, her friends both close and more distant -- know the hole in the world created by her leaving us.  Her sons moved away, part of the North Dakota diaspora, but returned home frequently and called regularly.  Her neighbors on all sides adored her.  This is what sums up who she was: once they met Joan, people just had the habit of falling in love with her.  There are no more words to say.

In addition to Neil Fricke, Joan was preceded in death by her father, Earl; her mother, Hazel; her brothers, Earl, Robert, and Paul; and her sisters, Patricia and Kathryn.

In lieu of flowers, donations may be made in her memory to the Bismarck Emergency Food Pantry, 1012 S 12th St., or to the Student Lunch Assistance Program at the Bismarck Public Schools Foundation (https://www.bpsfoundation.com/donations/student-lunch-assistance/).

To order memorial trees or send flowers to the family in memory of Joan Fricke, please visit our flower store.