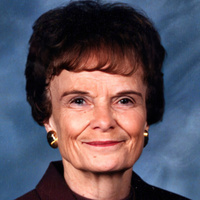 Joan Marie Benson was born May 17, 1935, in Bowman, ND, the daughter of Stanley and Alice (Gausemel) Benson. Joan was raised and educated in Bowman, where she participated in music, tumbling, and cheerleading.  Choral music would eventually become a lifelong passion for Joan, after discovering records by vocal harmony groups like the “Four Freshmen” in high school.  After graduation, Joan attended Concordia College in Moorhead, MN for two years before moving back to Bowman to teach.  During that time, Joan also directed the choir at the Methodist church.  Two short years later, she returned to Concordia and obtained her Bachelor of Arts degree in 1959.  Joan moved to Bismarck at that point to begin her brief, but memorable, career in teaching.

Joan married David Leer on August 18, 1962, in Bowman, after meeting David at Trinity Lutheran Church in Bismarck, during rehearsals for Handel’s “Messiah.”   To this union, four sons were born: Philip, Timothy, Daniel, and Joel.  Joan spent much of her life as a homemaker, raising her four boys and providing a safe and comfortable refuge for her family and for everyone who visited.   Joan was famous for her emotional expressiveness, her “lingering” hugs and her tender spirit; she also often would grab your arm or gently caress your cheek when you were near.   As one of her grandkids put it shortly before her death, she “loved wholeheartedly.”  A lifelong baseball fan, Joan joined David in following the ups and downs of the Minnesota Twins, and passed on her love for baseball to all her sons.  The last night of her earthly life in Sanford Hospital, family members joined Joan in her room to say goodbye, listen to sacred hymns, and cheer on the Twins (they won!).

Joan’s sturdy Christian faith was the anchor of her life, and it guided her right up until the very end.  In the days leading up to her death, David and Joan continued their ritual of morning devotions, which included the naming of all their closest family members in prayer.  She was a quiet and towering witness of the Gospel of Christ, and lived a rich life of selfless service to her Lord and to those around her, especially her family.  Joan and David were proud charter members of Lord of Life Lutheran Church and have remained members there since its inception. Throughout her years of service at Lord of Life, Joan participated on the church council and the choir, was the superintendent of and taught Sunday School, and was an integral part of Lord of Life’s prayer ministry.   Joan’s handwritten “care cards” were bouquets of healing grace to everyone who was blessed to receive one.  Her elegant handwriting was legendary.

Joan is survived by her husband of 60 years, David; sons, Philip, and Timothy (Molly), Bismarck, Daniel (Courtney), Owatonna, MN, and Joel (Elizabeth), Northfield, MN; 15 grandchildren; and nine great-grandchildren.  Joan and David gathered with family members the first weekend of August of this year at son, Philip’s house to honor their 60 years of marriage, and many family members were blessed to be able to attend.  It was a relaxed and joyous celebration, and, unbeknownst to everyone in attendance that glorious day, a fitting denouement to a grace-filled life well-lived.  Well done, good and faithful servant of God.   You will be dearly missed.

Joan was preceded in death by her parents, her sisters, Myrtice, Phyllis, and Dorene, and their spouses.

In memory of Joan, memorials may be made to the music ministry of Lord of Life Lutheran Church, Camp of the Cross Ministries (Garrison), or Metigoshe Ministries (Bottineau).

To order memorial trees or send flowers to the family in memory of Joan Leer, please visit our flower store.