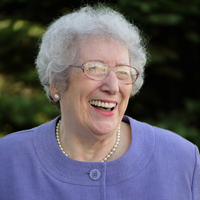 Joan Elise Nelson Simons, 92, passed away peacefully in her home on September 26, 2022, surrounded by her children, coherent, and asking for ice cream up until the end.

Joan was born on December 2, 1929 to Paul and Gladys (Williams) Nelson in Carrington, ND and was christened Joanne Elise Nelson; however, she later changed her name to Joan because she thought it sounded more sophisticated. She attended schools in Carrington, Fargo, Towner, Valley City and Jamestown, graduating from Jamestown College in 1951. She always spoke fondly of her days at Jamestown College where she was very active in choir, band, and drama, once even playing the lead role of Lady Macbeth.  It was also there that she met her husband, Robert W. Simons, and they were married in 1954. Together they had two children whom they affectionately called Barbie and Bobby.

Joan was very thankful for her education degree and used it to teach Art, Drama, Remedial Reading, and English at Devils Lake, the State Industrial School in Mandan, Wilton High School, and Bismarck High School for 39 years. She was known to her three grandchildren as “Grammar” since she often corrected theirs. Hopefully thousands of North Dakotas who were in Mrs. Simons’ classes are now avoiding bad grammar, run-on sentences, dangling participles, etc.

Her grandchildren remember her home as a peaceful place of order where they would come and eat “safe snacks” like boxes of raisins or cottage cheese and fruit on fancy plates, but never any “dangerous pop,” which was anything with caffeine. However, she did have one indulgence: ice cream. You could always count on getting an ice cream drumstick out of the freezer at Grandma’s house, which she would serve to you with a napkin and on a placemat at her dining room table. You could also count on great conversations seasoned with her exclamations of, “How wonderful!” Or, “Just marvelous!”

Joan was an active member of McCabe United Methodist Church, serving on the funeral committee for years. She was in charge of calling and asking people to bring cookies for funerals, and she mentioned from her hospice bed that she sure hopes someone will do that job for her funeral. As well as doing other volunteer work in the community, Joan spent her time journaling cute things her children and grandchildren did and putting together scrapbooks for each of them, tracking down relatives for her genealogy studies, making homemade cards with cute comics and random scrapbook paper to write endless letters, reading fiction, and playing piano. Never one to be bored, she also learned to use a computer in her later years and became an avid emailer.

She was preceded in death by her husband; her parents; and her brother, Roger Nelson.

To order memorial trees or send flowers to the family in memory of Joan Simons, please visit our flower store.