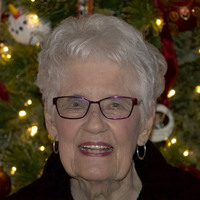 Visitation will be held from 5 to 7 p.m. Monday at Parkway Funeral Service, 2330 Tyler Parkway, Bismarck, where a prayer service will begin at 7 p.m.

While attending Wartburg College, JoAnn met her partner in life, Robert Lynne, and they were married on September 5, 1954, in Mason City. He was receiving his Seminary Training. Following his Seminary education, they moved to Mott, North Dakota, for his first call at Trinity Lutheran Church. Joann enjoyed a life of service, supporting her husband, the church, family and friends. Each and every day JoAnn put a smile on many faces. JoAnn was a humble servant of Our Lord.

Memorials may be given to Good Shepherd Lutheran Church or Bishop Robert Lynne.

To order memorial trees or send flowers to the family in memory of JoAnn Lynne, please visit our flower store.