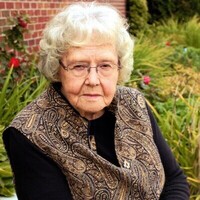 Funeral services will be held at 10:30AM, Monday, September, 26 at Parkway Funeral Services, 2330 Tyler Parkway, Bismarck.

JoAnn Edith Schumacher was born October 3, 1929, in Napoleon, ND, to Otto and Lucy Mae (Wiebusch) Wentz. She was raised and educated in Napoleon.

JoAnn married Ted Schumacher in Bismarck. They lived near Napoleon where she worked in a restaurant, at grocery stores, and also helped on the farm. In 1983, she moved to Bismarck where she was employed at The Wok restaurant for seven years, at the King and Queen variety store in Kirkwood Shopping Mall, and for thirteen years at Speedway Restaurant. She moved to Regan, ND, in 1993, and retired from her work in 1999. JoAnn considered work to be her hobby and was extremely dedicated and energetic in all that she endeavored. She was a member of Sunne Lutheran Church in Wilton, ND and also a member of Ascension Church in Bismarck.

JoAnn was dearly loved and will be deeply missed by her family and many good friends.

JoAnn was preceded in death by her parents; her son Thomas Schumacher; five brothers, Warren, Gene and Floyd, Ralph and Gordon Wentz; her sister, Carol Moser; her husband, Ted Schumacher; and her special friend, Ivan Lange.

To order memorial trees or send flowers to the family in memory of JoAnn Schumacher, please visit our flower store.