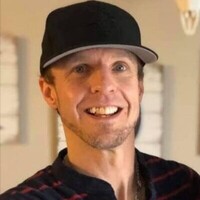 Visitation will be held from 5 to 7 p.m. Friday at Inspire Family Fellowship, Bismarck. A memorial service will be held at 7 p.m.

Joby Kent Seagren was born May 31, 1980 to Larry and Brenda Seagren. He attended grade and high school in Robinson. Joby’s class of 1998 was the last class out of Robinson High following the school’s closure.

Joby was an athlete and had a special place in his heart for baseball. He played on the Robinson teams all throughout his school career. In the winter months, he played basketball and enjoyed the competition that sports provided. After high school, Joby attended Bismarck State College and attained an associate degree in Applied Science. He also attended North Dakota State University and studied biology.

He showed interest in electronics and new technology. His first major job was with Office and Technology in Bismarck. The office was based in Bismarck, but he had the opportunity to travel the United States with his team. They would install all the needed wiring and cables to convert theaters from movie reels to digital technology.

Joby touched the lives of many throughout his trials of addiction. Joby was in recovery but knew the everyday struggle to stay sober. His turning point was Hope Manor and the F5 Project in Bismarck. Joby served many recovering addicts and knew their struggles firsthand – as he had once walked their path.

His last few years were spent being employed at Kitchen Refresh in Bismarck. He was employed from the beginning of the business when Chris Reineke gave Joby the second chance he needed. Joby became the shop foreman. This is where his biggest ministry was, as he and Chris hired people who needed the second chance Joby received. He helped those struggling find employment, encouraged them to restore family relationships and guided them to build their faith – which is a pillar for recovery.

He was a member of Surprise Church in Bismarck. His attendance brought him the love and acceptance that he needed. Pastor Matt Anderson and Ernie Hockett taught him the spiritual path that God desired for him and that Joby passed on to his children and peers. He was always telling us, “God has a plan for me!” We know God welcomed him home with, “Well done, good and faithful servant! He is home!”

He was preceded in death by his grandparents, Oscar and Emma Seagren and Willis and Norma Johnson; uncles, Warren Johnson and Gerald Gramling; and cousins, Brianne and Shane Nutter.

In lieu of flowers, the family prefers memorials may be made to an account set up in Amy Jo Seagren Hunt’s name at Capital Credit Union. Memorials in honor of Joby will be put towards Baileigh and Bentley’s future.

To order memorial trees or send flowers to the family in memory of Joby Seagren, please visit our flower store.