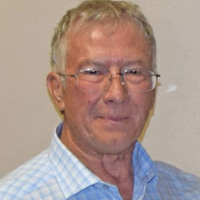 Joseph Eugene Schumacher was born to Wendelin and Christine (Baumgartner) Schumacher in Hague on December 15, 1942.  He spent his childhood on the family farm until he enlisted in the Army.  He proudly served as a mechanic from 1960 to 1963. Joe spent his life working in construction building houses and remodeling. Later on, he worked in the oilfield until his retirement.  He was a very social person (he never knew a stranger; he could strike up a conversation with ANYONE!), he loved spending time with friends and family sharing stories over a cup of coffee or a nice cold red beer.  Joe loved to spend his time tinkering in his shop (there was nothing he couldn’t fix!), fishing, hunting and attending his grandchildren’s school events. He will be greatly missed by his many friends and family.

To order memorial trees or send flowers to the family in memory of Joe Schumacher, please visit our flower store.