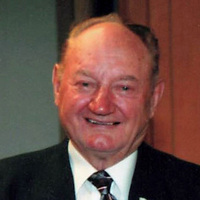 John was born on Feb 19, 1928, the son of Joseph and Clara (Schmidt) Leier. He was raised on a farm near Napoleon, ND. He attended Manheim Grade School. John married the love of his life, Monica Horner, on June 20th, 1950. They made their life on the farm north of Braddock where they raised 9 fabulous children that he loved dearly. It’s a miracle they all survived given the craziness of farm life and a large family.

John was a great husband (with a great sense of style), father and grandfather. He loved fishing, hunting, and trapping. In his later years, he enjoyed taxidermy. John enjoyed playing baseball with his kids and grandkids. He enjoyed farming but milked cows to pay for dental work and glasses. They quit milking when the youngest boys graduated from high school. His favorite pastime was playing pinochle even though he got all the 9’s and Jacks.

John and Monica enjoyed traveling. They made many trips to Canada fishing, took bus trips and went on cruises. They enjoyed visiting family. They never missed a wedding, funeral, or an event for their kids or grandkids.

John touched many lives with his smile, laugh and sense of humor. He is free of the burdens of his earthly life. He will be greatly missed by many.

To order memorial trees or send flowers to the family in memory of John L. Leier, please visit our flower store.