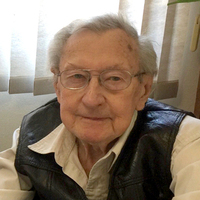 Visitation will be held from 3 to 5 p.m. Sunday, July 18, at Parkway Funeral Service, Bismarck.

Burial will be held at Mission Cemetery, Wilton.

John was born December 5, 1927, to Charles and Elizabeth (Sandelin) Lind at Grass Lake, northeast of Wilton. He completed his rural education in Grass Lake Township. He attended two years of high school in Wilton before the family moved to Bremerton, Washington, in 1943, where he graduated from high school in 1945. He attended the University of Washington in Seattle for one year. Upon moving back to North Dakota, he began employment with the North Dakota Highway Department as a draftsman in 1947. Having a brief interest in flying he obtained a student license and did some solo flying.

He was inducted into the Army in 1950, serving in the Oklahoma National Guard 45th Infantry Division during the occupation of Japan and the Korean War. His comment on service was that he got six months of foxhole pay and stood on the 38th parallel. His most coveted award was the "CIB" or Combat Infantry Mans Badge. He also received the Korean service medal with one Bronze star and one Occupied/Service United Nations Service Medal upon his honorable army discharge. In September 1952, he returned to work with the North Dakota Highway Department.

John married Donna J. Noon on December 26, 1954. He would tell of well remembering meeting her when she was five days old.

He retired after 43 years as a Certified Engineering Technician, producing annual variations of North Dakota traffic maps for 35 years. His retirement years were spent with several trips to Alaska, visiting relatives and gold prospecting. John and Donna visited both United States Coasts and attended military reunions. He was a member of the Legacy United Methodist Church and was a lifelong member of the AmVets, VFW, American Legion and the NRA.

His favorite sport was competition shooting with modern and muzzle loading firearms. He made many deer and upland hunting trips. John also enjoyed repairing any item that came across his workbench.

He was preceded in death by his parents, Charles and Elizabeth Lind; brothers, Ernest, William (Bill), and Rollo Lind; son-in-law, Truman Janssen and great-granddaughter, Lauren Hill.

To order memorial trees or send flowers to the family in memory of John Lind, please visit our flower store.