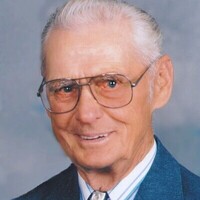 John, son of Gustov and Ottiela (Brandt) Rosenau, was born April 17, 1924, on the family farm five miles west of Tuttle. John received his education in the Tuttle area and was inducted into the U.S. Armed Forces, serving his duty in the Philippines, from 1946-1947. He returned to the family farm and began farming and ranching.

On October 22, 1952, he married Betty J. Burkart, at St. John’s Lutheran Church in McClusky.  They continued to farm and ranch west of Tuttle, where they built their life for the next 64 years.  They were blessed with two sons, Daryl and Larry.  They were active members of the English Lutheran Church in Tuttle.

John took pride in caring for the land homesteaded by his father in 1909.  The farm was granted Centennial Farm status in 2009, becoming a part of North Dakota’s history.  Through the years he acquired additional land where he farmed and ranched alongside his wife and taught his sons the value of an honest day’s work.  He spoke fondly of his days on the farm:  the calves they birthed in the spring, the square hay bales they put up in the summer, the wheat they harvested in the fall, and the snowstorms they endured in the winter, most notably the Blizzard of 1966.

His grandchildren and great grandchild brought him much joy.  A visit was never complete until Gpa, as the grandkids called him, engaged them in a spirited game of Roust.  He rode motorcycle alongside his sons and grandson until well into his 80’s.

After his wife passed in June 2017, he moved into assisted living at Valley View Heights in Bismarck, but his home was still on the farm.  He filled his final days listening to the Polka Party, watching rodeos, and reminiscing with stories of a life well lived.

He was preceded in death by his wife, Betty, his son, Larry, his parents, and seven brothers and sisters, Ted, Albert, and Clarence Rosenau, Olga Uhlich, Hilda Brose Klein, Ruth Spah, and Ella Brose.

“A father’s love remains in memory, in spirit, and within the heart of who we are – today, tomorrow, and always.”

To order memorial trees or send flowers to the family in memory of John Rosenau, please visit our flower store.