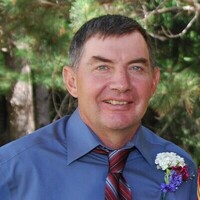 John Charles Shipley, 67, went to his heavenly home on Dec. 5, 2020. A celebration of life will be held in the spring. A private family service will be held 7 p.m. Thursday, Dec. 10 at the Steele United Methodist Church. A livestream of the service will be available on the church’s Facebook page: https://www.facebook.com/STR-UMC-358510421550292/

John was born on April 9, 1953 to Charles and Mathilda (Pfeifer) Shipley of Steele. John grew up on the family farm that his grandfather, Fred Shipley, homesteaded in 1900. Since John was the first grandson born in the Shipley family after five granddaughters, Grandpa Fred gifted the family a whopping $100.

He loved all aspects of farming and ranching – except the dairy cows. He usually managed to avoid the milking chore by “feeding up,” repairing machinery or working in the shop. He loved the memories of growing up on the farm and sharing that time with his parents, siblings, cousins, friends and neighbors. Many farm kid memories were made in the barn, riding horse, driving farm trucks, working in the field, taking things apart, inventing and trying to reassemble.

John attended Steele Public School graduating in 1971. As a senior in high school, little did John know that the young freshman girl sitting in the row next to him in study hall would catch his eye and later steal his heart. John went on to attended NDSCS in Wahpeton and graduated with a degree in Electrical Technology. On June 20, 1975 John married “that girl” Laura Roemmich and together they put down lifelong roots at their country home and farm northwest of Steele. In 1984, John became a Master Electrician and started his own electrical business, Shipley Electric. He covered the countryside of Kidder County and surrounding areas doing electrical work and making many friends along the way. John burned a lot of midnight oil being a farmer, rancher and electrician but nothing compared to the cherished title, “Daddy.” He loved being a dad, teaching the values of hard work, a job well-done, being humble, having integrity, loving others and enjoying life – but most of all instilling a desire for a faith in God and the gift of salvation and eternal life through Jesus Christ.

John enjoyed his involvement with the Steele Fire Department, Excelsior Township Board, Kidder County Right to Life president, Badlands Trail Riders member, Church Youth Leader and Church Worship Leader. He has been a lifelong member of the Steele United Methodist Church. He cherished the fact that five generations of Shipleys shared in this congregation. Though he loved his Christian heritage, he knew church attendance was not his ticket to a home in heaven and was always willing to share his faith.

One of John’s greatest joys was time he spent in the saddle. Whether it was working cattle or trail riding, he seemed to fit a saddle just right. He found so much happiness in sharing his love of horses and riding with Laura, Josh, Jonni, Caleb and Isaac. Later, he enjoyed riding with their spouses and with his grandchildren… who were the apple of his eye. Many friendships were made and cultivated on the back of a horse, along a dusty trail and around a good campfire at the end of the day.

At the age of 40, John was diagnosed with Parkinson’s Disease. Though this disease changed the path he planned for his life journey, it never changed his character or shook his faith. His love for his family was always evident and his heart’s desire was that, “May All Who Come Behind Us Find Us Faithful.”

John is also survived by many nieces and nephews who were dear to his heart.

In lieu of flowers, memorials may be made to Steele United Methodist Church.

To order memorial trees or send flowers to the family in memory of John Shipley, please visit our flower store.