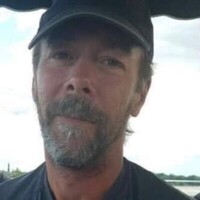 John Charles Stockwell, 50, Bismarck, passed away unexpectedly at his home on June 13, 2022.

John will be forever missed by his family and friends in both Connecticut and North Dakota.  John was born and raised in Woodbury, CT, and moved to Bismarck eight years ago for a job opportunity with Prairie View, an irrigation company.  He immediately made long lasting friendships with everyone he met and was considered family in his new home.  John also became a father for the first time and loved his daughter, Calista Lily, very much.

John will be remembered as a great guy with a very good sense of humor, passion for guitars, animals, and the outdoors.  Throughout the years, John played guitar in a few bands with a heavy metal influence.  He loved his hedgehog, Jefferson, and was often caught feeding the geese at work. Some would even say he was an animal whisperer. Although John left us early, he made a positive impact on many lives and will always be in our hearts and minds.

“So close, no matter how far, Couldn't be much more from the heart

Forever trusting who we are, And nothing else matters”

At the request of John’s family, Eastgate Funeral Service will be handling the arrangements privately with his family.

To order memorial trees or send flowers to the family in memory of John Stockwell, please visit our flower store.