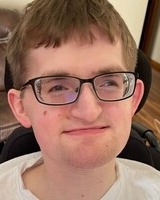 Visitation will be held 4-6 p.m. Tuesday, July 26, at Parkway Funeral Service, 2330 Tyler Parkway, Bismarck. A prayer service will begin at 6:00 p.m. In honor of Jordan, you are encouraged to wear your favorite team jersey.

Burial will be at Fairview Cemetery, Bismarck.

Jordan Paul Jans was born October 27, 1997, to Dwight and Suzanna (Bengtson) Jans in Bismarck, North Dakota. He was baptized into the Lutheran Faith as an infant and attended Good Shepherd Church his entire life.

Jordan, along with his brother Joshua, was raised in Bismarck. He attended school at BECEP, Jeannette Myhre Elementary School, Wachter Middle School, and Bismarck High School (Class of 2016). He went on to Life Education for three years and began his Rec-Leisure Day Program at HIT in June 2019, where he enjoyed various day activities with his friends and dedicated staff.

From birth, Jordan impressed upon everyone he had a fighting spirit embedded within him, being the toughest guy in the room. He endured and overcame many challenges, illnesses, and surgeries over the years and always triumphed with a determined attitude. He expressed strength and courage despite his Cerebral Palsy and other health challenges.

In his past time, Jordy enjoyed watching sports, especially any kind of football (The Minnesota Vikings and the NDSU Bison, and sometimes the Chiefs!). Jordan also liked to joke (“Go, Pack, Go”) with his family and friends. He participated in Home-Run Heroes and had a team in the GABR race. Jordan liked watching movies with his family including Marvel Movies, like Thor. He often was found next to his dad watching old-time shows like Andy Griffith and Gunsmoke. He also liked to watch Scooby-Doo, who he met at Universal Studios on his 12th Birthday during his Make-A-Wish. Jordan always had a smile and a twinkle in his eye that could light up a room. Often the loudest guy in that room, he liked to be around other people and involved in the conversation. He was a great listener and loved to have his family by his side. He enjoyed listening to 80’s Rock and old-time Country music.

He was preceded in death by grandparents, Bennie and Karen Jans; great-grandparents, Paul and Delores Bengtson, Francis Athey, Lyle Terwedo, and Fred Stelter; and a special cousin Leo Jans.

The family would like to thank all those who assisted in caring for Jordan over the years Dr. David Field and the staff of Sanford Health, Pride, Inc. In-Home support staff, Dr. Goebel and the staff of Goebel Pediatric Dentistry, Dr. Litchfield and Dr. Otteson and the staff of Dakota Eye Institute, the BPS Paraprofessionals and Teachers, DSP Rec- Leisure, and all staff at HIT.

To order memorial trees or send flowers to the family in memory of Jordan Jans, please visit our flower store.