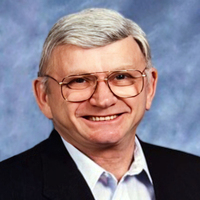 Visitation will be held from 4 to 6 p.m. Monday at Eastgate Funeral Service, 2302 E Divide Ave., Bismarck. A rosary/vigil service will be held at 6 p.m.

Burial will be held 1 p.m. at the North Dakota Veterans Cemetery, Mandan.

Joseph was born on November 16, 1934, to Joseph and Mary Pfeiler in a small farmhouse near Almont, North Dakota. His father passed away when he was young, and he spent time taking odd jobs to help with the family income.

Joe joined the U.S. Navy during the Korean Conflict from 1952 to 1956 and served on board the naval Destroyer ship, the USS Robert McCard. After four years in the Navy, he enlisted in the U.S. Air Force for the next four years and received training as a machinist. Upon completion of his service, Joe met and married his beautiful wife, Elizabeth “Betty” Schmidt in 1960 and they made their home in Mandan.

Joe began his career as a machinist in Bismarck, and after a couple years, took a job with the Northern Pacific Railroad – later becoming Burlington Northern – in Mandan. He worked there for 30 years and retired in the 1990’s. He then devoted his time to helping his wife daily with an in-home daycare center.

Joe is survived by his wife of 62 years, Elizabeth; Joseph (Katherine) Pfeiler Jr., Adrian (Amy) Pfeiler, Cynthia (Toby) Sheldon, Arlene Pfeiler; five grandchildren; and a great-grandson. Joe was blessed with one full sister, Irene Gratz; five half-brothers and a half-sister from the Kokkeler side, and 13 step-siblings from the Erhardt side.

He was preceded in death by his parents; siblings; one grandson; and infant son, Joseph.

The family would like to thank the staff at each of the following facilities for Joe’s care throughout the years: Medcenter One, Missouri Slope Nursing Home; Sanford Health; Baptist Health and Rehab; and the Veterans Administration.

To order memorial trees or send flowers to the family in memory of Joseph Pfeiler, please visit our flower store.