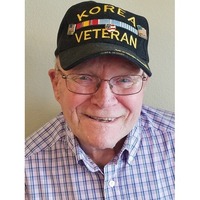 Visitation will be from 5 to 7 p.m., Sunday, August 29  with a rosary/vigil service starting at 7 p.m. at Parkway Funeral Service, 2330 Tyler Pkwy, Bismarck.

Joseph was born July 15, 1929, the son of John H. and Mary (Bender) Thomas. He attended St. Anthony Parochial School and Mandan High School. He served in the Army from 1951 to 1953 during the Korean War.  He was honorably discharged with a rank of Sergeant. Joseph was awarded the following metals: The Army Occupation Medal (Japan), The United Nations Service Medal, The Korean Service Medal and received one Bronze Service Star. After service, he was employed with Armours Creamery for 10 years and Cloverdale Foods for 28 years, retiring in April of 1994. He then worked part time at the Civic Center.

He married Adeline Emter on June 25, 1956, at St. Joseph’s Catholic Church in rural Glen Ullin. They were blessed to recently celebrate their 65th anniversary.  Joseph was a member of Ascension Catholic Church in Bismarck and the Eagles Club.  He loved spending time with his family and visiting his friends at the Burleigh County Senior Center.  He loved doing puzzles and watching Wheel of Fortune.

To order memorial trees or send flowers to the family in memory of Joseph A. Thomas, please visit our flower store.