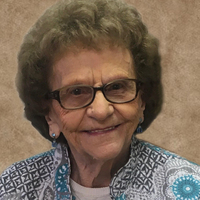 Josephine Schatz, 95, Bismarck, passed away on May 7, 2022, surrounded by family. Mass of Christian burial will be held 10:30 a.m. Friday, May 13 at Ascension Catholic Church, 1825 S Third St., Bismarck. The service will be livestreamed on the funeral home's website.

Visitation will be held from 5 to 7 p.m. Thursday at Eastgate Funeral Service, 2302 E. Divide, Bismarck, with a vigil prayer service beginning at 7 p.m.

Josephine was born on March 16, 1927, northeast of Zeeland, North Dakota, to Joseph and Malonie (Malsam) Feist. She was one of seven children who grew up on the family farm near Zeeland and attended country school through the eighth grade. Josephine raised chickens and was the  fastest plucker in the county. She later moved to Bismarck to work at St. Alexius Hospital in the surgical department for a short amount of time to earn enough money to buy her wedding dress.

On November 23, 1949, she married John Schatz in Hague, North Dakota. They settled on a farm southeast of Zeeland where they raised seven children. As a wife and mother, she enjoyed cooking, baking, gardening and sewing.

John and Josephine retired and moved to Bismarck in 1982, where they were active members of Ascension Church. She enjoyed attending daily Mass, having coffee with friends and daily walks. Sunday was a special day when she made ‘Sunday Soup’ for her family to come and enjoy after Sunday Mass. Holidays were spent with her family where everyone gathered together for her delicious meals. Josephine loved spending time with family and considered them one of her many blessings.

Josephine and John moved to Marillac Manor in 2008 due to John’s health issues. There, a new tradition of Sunday night pizza replaced the Sunday soup gathering. She enjoyed attending daily Mass and the many planned activities there. She developed many close friends and she enjoyed playing cards with them.

Mom was known for her famous fudge that she shared with family and friends. She lived her life with dignity and grace, managing to find the good in everyone.

Due to sudden health decline, she was admitted to St. Vincent’s and CHI Hospice Care on February 28, 2022. She was greatly appreciative of their care. Josephine had a deep faith in Jesus which led to a life of daily devotion of praying and Mass. She left us a legacy of faith, love, strength and grace that will carry on through family and friends. We will miss her sense of humor, kindness and loving spirit.

To order memorial trees or send flowers to the family in memory of Josephine Schatz, please visit our flower store.