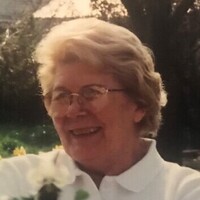 Joyce Lee Conrad, 95, Bismarck, died May 18, 2021, of cancer following a brief illness.  Joyce was born on April 27, 1926, in Devils Lake to Carl and Lillian Lee.  She graduated with honors in the field of journalism from University of North Dakota in Grand Forks in 1947.  After graduation she was a reporter for the Grand Forks Herald newspaper.  In 1948, she moved to Bismarck as a reporter for the NPL Leader.

Joyce was involved in the insurgent movement that merged the NPL with the Democratic Party.  In the 1960’s Governor Guy appointed her to the State Health Council, the State Park Board, and several advisory committees.  Twice she was a legislative candidate.  She was elected to many positions in the Democratic NPL Party.  Joyce chaired the Party’s first Affirmative Action Committee in 1974.

Her husband and his brothers, Currie and John, owned the Conrad Publishing Co.  In 1963 they purchased and published the Morning Pioneer.  1966 - 1975, Joyce was Managing Editor.

Subsequently, Joyce and Charles published a two-volume history of Williams County and wrote and published “Fifty Years: The North Dakota Farmers Union.”  The couple relocated to Washington DC in 1977. She was employed by the National Farmers Union, the National Consumer Bank and, then, was executive director of Organizations Concerned about Rural Education.  In 2016, Joyce returned to live in Bismarck.

Joyce and her husband, Charles, were founding members of two Unitarian Universalist Fellowships, in Bismarck-Mandan and in Southern Maryland.

She was preceded in death by her husband of 55 years, Charles O. Conrad.

Covid-19 vaccinated friends and family will have space to social distance. The service will be available through the “zoom” link on the Fellowship’s website.

To order memorial trees or send flowers to the family in memory of Joyce Conrad, please visit our flower store.