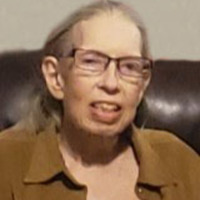 Judy was born on May 30, 1948 on Memorial Day to Corinne V. (Buckley) and Laurence J. Woodland in Minot. She was raised on a farm south of Glencoe Presbyterian Church and attended schools in Bismarck and graduated from Bismarck High in 1966. She received a clerical degree from Bismarck Junior College in 1967. The family moved to Bemidji, Minn., until her father’s death and Judy and her mother moved the mobile home to Bismarck Colonial Estates. Corinne and Judy worked at the newly open Kirkwood Motor Inn for years. Judy enjoyed working, so she worked at Lincoln Oak Tree Nursery, too.

On Nov. 8, 1975 Douglas Schnase, the son of Bertha B. (Bakken) and Henry Schnase, married Judy at the Bismarck Baptist Church, which was wheelchair accessible. Together, the two worked for the N.D. State and resided at 2228 Kennedy Ave. for 20 years until Douglas built an up-down twin house on Hoover Ave. Judy continued to work and worked for fast food restaurants, the Baptist home and Marshall Fields  while their daughter, Wendy (Schnase) Kreft, was growing up. In 2004, Judy was diagnosed with cancer and went through many years of treatment.

In lieu of flowers, family requests donations be made to the American Cancer Society.

To order memorial trees or send flowers to the family in memory of Judy Schnase, please visit our flower store.