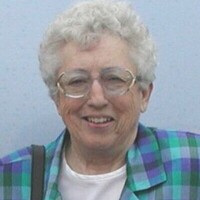 June Haupt left to meet her heavenly family on March 12, 2022, at Miller Pointe, Mandan. She was 91. A memorial service will be held at 5:30 p.m. Wednesday, March 23 at Eastgate Funeral Service, 2302 E Divide Ave., Bismarck. She will return to Cut Bank, Montana, in the summer to be buried with Bud.

June was born on September 4, 1930, in Havre, Montana, to Freda and Lloyd Muncy. She was raised by her mother as her father was killed in an automobile accident when she was young.

June graduated from Chester High School in 1949. She married the love of her life on November 5, 1950, Melvin Kenneth Haupt, better known as Bud. This was a union that would last for 37 years.

June enjoyed working with Bud, counted cross stitch, playing cards and the many adventures with family and friends at Lake Five in the mountains of Montana. June left Montana and moved to North Dakota to be closer to her daughter.

She is survived by her son, Mike Haupt; daughter, Bonnie Tomac; Nick Tomac, Ted Poppke; and many nieces and nephews.

June was preceded in death by her mother, Freda Muncy; her husband, Bud Haupt; her uncle, George Braun; her brothers, Elmer and Dale Muncy; and her sister, Lorraine (Muncy) Polacek.

A big thanks to all the staff at Miller Pointe Nursing Home who cared for her for the last four years.

To order memorial trees or send flowers to the family in memory of June Haupt, please visit our flower store.