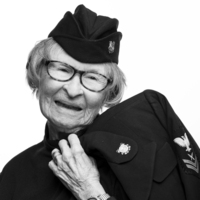 Kathleen Marguerite Ruff Donahue graced this earth for 98 years until she passed away to be with our Father in heaven on July 9, 2022.

Kathleen was born February 6, 1924, to William and Alma Ruff of Cincinnati. Her brother William was born a little more than one year later. She cherished Bill as he did her, and they remained good friends throughout their lives. Kathleen had many fond memories of swimming in the Ohio River with her family, playing in the wooded area behind their home on North Berkley Circle, camping in the Smokey Mountains, and dancing with her brother on the Island Queen Riverboat.

Kathleen attended St. John the Baptist School and Walnut Hills High School, a college preparatory school where she was challenged academically and excelled. During World War II, she served in the United States Coast Guard SPARS. Kathleen described the years she served in the Coast Guard, from 1944 to 1946, as the best years of her young adult life. She attended training in Palm Beach, Florida, before she was stationed as a Yeoman Second Class at St. George Station in Staten Island, New York. Her best memories were of Navy Day when the fleet of ships lined up in New York Harbor, being escorted to the front of the line at Broadway plays with her fellow SPARS, and the foggy July morning in 1945 when a B-25 Mitchell bomber flew into the Empire State Building. Kathleen’s stories of the second World War remain a part of us forever; she was interviewed in 2020 as part of an effort to record the stories of the SPARS for the National Archives.

Kathleen returned to Cincinnati in 1946 and went to work with the Veterans Administration before attending Jewish Hospital Nursing School and then Edgecliff College where she received her Bachelor’s of Nursing degree.

Kathleen learned one of her greatest hobbies during those initial post war years – flying. Kathleen proved to be a skilled pilot, even executing a dead stick landing in a field when the plane engine failed. It was through her love of flying that she met her husband, James J. Donahue, then a flight instructor. They shared an insatiable quest for knowledge and instilled in their children, Michael and Kathleen, a love for reading and learning. Their children feel blessed to have parents who created a happy and secure home.

Kathleen worked as a nurse at Providence Hospital in Cincinnati for many years until retiring in 1989.  During her retirement years, Kathleen and Jim took up a new hobby, shooting; Kathleen proved to be skilled and proficient in the use of firearms. Kathleen lost the love of her life in 2003. In 2017, Kathleen moved to Library Square, Mandan, North Dakota, to be closer to her daughter and son-in-law and close friend, Ryan Thompson. Their friends quickly became Kathleen’s friends.

In lieu of flowers, please consider donations to the Cathedral of the Holy Spirit Livestream or the Greater Cincinnati (Ohio) Women’s American Legion Post 644.

To order memorial trees or send flowers to the family in memory of Kathleen M. Donahue, please visit our flower store.