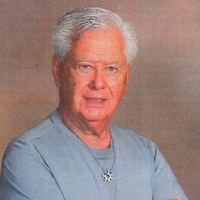 Burial will be held at St. Mary’s Cemetery.

Ken was born on November 16, 1935 in Bismarck. Following his high school graduation, he served in the U.S. Army from September 1954 to July 1956. He majored in English at North Dakota State University.

After working in several states, Ken returned to Bismarck to help his mother operate the family bowling alley/bar. After selling the business, he began purchasing rental properties which he owned and operated for many years. During this time, he also worked as a server at several local fine-dining restaurants.

Ken sold his rental properties and became a “winter visitor” in Arizona and owned his own home there. He was a Silver Life Master in the American Contract Bridge League and competed in several tournaments.

In lieu of flowers, the family requests that donations be made to a charity of the donor’s choice in Kenneth’s name.

To order memorial trees or send flowers to the family in memory of Kenneth Nicola, please visit our flower store.