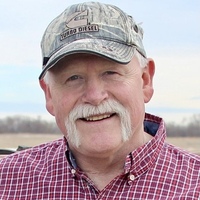 Kerwin was born on November 25th, 1962 in Richardton, ND to Ralph and Irene (Swoboda) Kitzan. He graduated from Glen Ullin High School in 1981. Kerwin married Caren Lennick on December 28th, 1985 in Hebron. He spent most of his career working for Exide Technologies before purchasing Motorheads in Fessenden. What made him happiest was spending time with his grandchildren, four-wheeling, snowmobiling, driving his tractors and getting the kids on them, too. Kerwin had a need for speed and we all knew he had a lead foot. He was proud of his Cummins pickup that his wife would have liked a ladder to get into. He also enjoyed cooking, going to the movies, telling a good joke and ping pong. He wasn’t a sore loser but he always said he was a better winner. He was an avid Twins fan and spent a lot of time hollering at the TV, hopefully they will do better next year.

He was preceded in death by his parents; sister, Vesta, her husband, Tom and daughter, Darcey; brother, Jeff; brother-in-law, Eugene Friesz; father and mother-in-law, Clarence and Lorraine Lennick.

There will be a family celebration of his life at a later date.

Kerwin will be laid to rest at the United Methodist Cemetery in Hebron.

To order memorial trees or send flowers to the family in memory of Kerwin Kitzan, please visit our flower store.