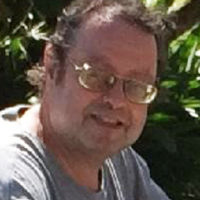 Visitation will be held from 2 to 5 p.m. Sunday at Parkway Funeral Service, Bismarck.

Kevin was born on June 13, 1957 to Richard and Clementine (Vetter) Boehm in Bismarck. He was the eldest of nine children. Kevin graduated from Bismarck High School in 1975. He was employed with Kirkwood Super Value until 1982. He then worked at Hardees as a Shift/Truck Supervisor until he suffered a disabling stroke in 2017. Kevin entered into Missouri Slope Lutheran Care Center in Sept. 2019. His conditioned worsened and his mother could no longer care for him at home.

He had a big heart and opened his home to many people over the years. If someone needed a place to stay, he was there for them. Kevin expected nothing in return – just helping them get back on their feet.

Kevin’s life was tabletop gaming. He and his friends would meet at least once a week, whether it was on computers or a board. One Easter, he was late because he was trying to get the key to enter a new universe.

Kevin was preceded in death by his father; two infant siblings; his grandparents; brother-in-law; and gaming brother, Ken Henricksen.

To order memorial trees or send flowers to the family in memory of Kevin Boehm, please visit our flower store.