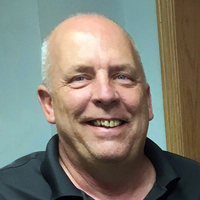 Kevin Allen Staub was born on September 30, 1962 to Luetta McClaflin and Melvin Staub.

Kevin married JoAnn Meduna on May 21, 1982 and they have three very amazing and beautiful children.

Kevin joined the Military in 1987 and served as a Cannon Crew member to the Army’s 10th Mountain Division in Fort Drum, New York until 1993. After his settling in Bismarck he was employed by Magnum Trucking.

He enjoyed sporting and clay shooting, four wheeling, motorcycling, and cheering on his grandchildren in their sporting events.  An avid outdoorsman, he loved to hunt anything and everything, he also enjoyed “resting his eyes” in his favorite spot, his recliner.

He was preceded in death by his brother, Kory; his grandparents, Agnes and Harold Staub, Bud and Lucille Rude; and his father, Melvin Staub.

To order memorial trees or send flowers to the family in memory of Kevin Staub, please visit our flower store.