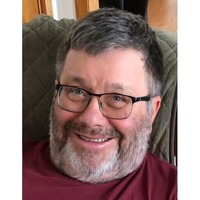 Kirby was born March 15, 1959, in Moorhead, Minnesota, to Manfred and Martha (Boschee) Leno. After Martha’s passing in 1963, Kirby was adopted by his great-uncle and aunt, William and Eudora (Mathis) Steinke.

He grew up in the Tuttle area and attended school there. He married Barbara Morlock on April 21, 1984, at Zion Lutheran Church in Bismarck. He made farming his occupation and took over the family farm after Bill died in 1986.

Kirby enjoyed old tractors, his dogs, and his grandkids.

He was preceded in death by his parents; brother-in-law, Ray Wetzel; sister-in-law, Mary Kuss; and father-in-law, Armin Morlock.

To order memorial trees or send flowers to the family in memory of Kirby Steinke, please visit our flower store.