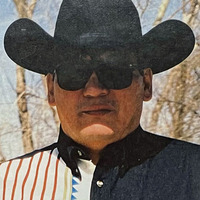 Visitation will be held from 2 to 6 p.m. on Tuesday at Parkway Funeral Service, 2330 Tyler Pkwy, Bismarck. A vigil prayer service will begin at 6 p.m.

Kirk Douglas was born on February 22, 1957, in Devils Lake, the son of Shirley (Cavanaugh) and Henry Johnson Sr.  He was raised and attended school in St. Michaels, where he was active in Boy Scouts and excelled on the basketball court during his school year in the ‘70s.

Kirk decided to serve our country and enlisted in the United State Marine Corps.  He traveled to San Diego, where his time in the service was cut short after he was injured and received an Honorable Discharge.  He then returned to North Dakota .

Kirk worked many different odd jobs throughout his years, but working as a mechanic was his favorite.  He enjoyed working on cars, whether it be taking them apart to rebuild them or just fix them up. He enjoyed the challenge. His last job as a self-employed ranch hand. He has resided in Bismarck for the last 10 years.

He had a love for horses and had two horses for over 20 years.  Kirk was proud of his heritage and was a fluent Dakota speaker. When he was younger, He loved to powwow dance and also sang at pow-wows. He enjoyed western style dancing.

He was preceded in death by his parents; daughter, Tenille Johnson; siblings, Clark, Selma, Adele and Henry, Jr.;

To order memorial trees or send flowers to the family in memory of Kirk Johnson, please visit our flower store.