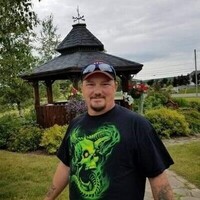 He was born to parents Curtis and Carol (Holweg) Wilson on December 8, 1972, in Bismarck. He attended Dickinson High School and got his GED. Kirk dabbled in many different things throughout his life and worked as a Truck Driver for a number of years.

He enjoyed  a variety of things including tattooing, poetry writing, singing, music, playing video games, watching wrestling and just keeping touch with his boys and spending time with his family.
Kirk met Lisa Wilson in 2007. They were married in 2015 in Bismarck. Together they have six children: Drake Wilson, Joshua Wilson, Timothy Wilson, Michael Miller, Faith Kay and Hunter Kay.

Message from Lisa: Kirk and I did not get nearly enough time together. But as heartbroken as I am, I am equally grateful. Even in these last few days of completely unexpected hell – the darkest and saddest moments of my life – I know how lucky I have been. If the day I walked down that aisle with Kirk someone had told me that this would happen – that he would be taken from us all in just 14 years – I would still have walked down that aisle. Because five years of being Kirk Wilson’s wife, and being a parent with him, is perhaps more luck and more happiness than I could have ever imagined. I am grateful for every minute we had.

As we put the love of my life to rest, we cremated only his body. His spirit, his soul, his amazing ability to give is still with it. It lives on in the stories people are sharing of how he touched their lives, in the love that is visible in the eyes of our family and friends, in the spirit and resilience of our children. Things will never be the same – but the world is better for the years my beloved husband lived.

To order memorial trees or send flowers to the family in memory of Kirk Wilson, please visit our flower store.