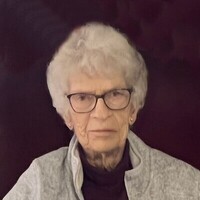 Lauretta was born September 15, 1930, near Esmond, ND to Carl and Betzi Lunde, the ninth of 11 children. She was raised and educated in Silva, ND. After graduating from high school, she taught school near Rosedale for a year before moving to Minot where she worked as a bookkeeper. While in Minot, she met Glenn Long.

On May 20, 1950, she married Glenn and to this union, five children were born: Gerald, David, Larry, Carla, and Roger. They lived in Cando 10 years before settling and making their home in Bottineau. Lauretta was devoted to her family and stayed at home to raise her children. She enjoyed supporting her children and attending their various school events.

Lauretta frequently volunteered with the Women’s Auxiliary at the hospital in Bottineau. She was active at the First Lutheran Church in Bottineau. She worked at several Bottineau restaurants where her baking skills were much appreciated. At the different places where she and Glenn lived, she would join a bridge club where she loved playing bridge and meeting new friends. Lauretta was also an excellent bowler. She was on a league during her years living in Bottineau and won many awards/trophies.

In their retirement, Lauretta and Glenn enjoyed spending time with their family and traveling. In the winter months, they became snowbirds and spent time in Las Vegas and Palm Springs. In their later years, they settled in Bismarck.

She was preceded in death by her husband, Glenn; children, David and Roger; siblings, Nuell, Orville, Lyle, Ade, Alvin, Pearl, Betty, MaryAnn, and Violet Mae; and her parents.

To order memorial trees or send flowers to the family in memory of Lauretta Long, please visit our flower store.