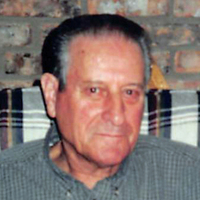 Visitation will be held from 5 to 9 p.m. Thursday at Eastgate Funeral Service, 2302 E Divide Ave., Bismarck. A vigil will begin at 7 p.m.

Leo was born on June 22, 1929, to Frank and Genevieve (Schlosser) Vetter. He was raised on the family farm east of Linton and was the third of eight children. He married Clementine Holzer on September 12, 1950. Leo was drafted in the Spring 1951 and returned in the Spring 1953. While serving in Korea his first child was born. When he returned, they farmed near Linton until moving to Bismarck in the Spring 1960.

In the early 60’s, Leo worked for Zoller Construction, building homes for a short time and Kirschmann Drywall before starting Vetter Drywall, later involving his sons in the business.

Clementine passed away unexpectedly in 1983 which left a hole in Leo’s life. Years later, he met Etta Plum and got back into dancing, playing pool, cards and socializing at clubs wherever they traveled. They enjoyed many winters at Lake Havasu, Ariz., before Etta’s passing in 2012. You could always hear Leo whistling and he enjoyed playing the harmonica.

He was preceded in death by his parents; his wife, Clementine; brothers, Joe and Frank; and special friend, Etta Plum.

The family would like to thank Missouri Slope Care Center for all the hard work and wonderful care provided to Leo.

To order memorial trees or send flowers to the family in memory of Leo Vetter, please visit our flower store.