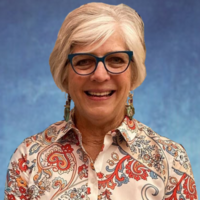 A service livestream will be available for viewing at the start of the service at the link.

Leora Mae Herrmann (née Potratz) was a woman who loved God and people with all her heart, mind and strength, and for that, she was loved by all who knew her. She died on September 18, 2021, after a car hit her on a morning walk that she had taken hundreds of times with her husband. The impact was so great that she rose instantly to be with the Lord, with no suffering. She was 64.

Visitation will be held Thursday, Sept. 23, at Parkway Funeral Service, 2330 Tyler Pkwy. Family will greet guests starting at 5 p.m. with a prayer service beginning at 6:30 p.m.

Lee was born on March 18, 1957, in Sioux Falls, South Dakota, to the Rev. Willis and Ruth Potratz. She was the third of four children: her oldest brother Steve; her older sister Eloise, who went to heaven on Jan 28, 2020; and her younger brother Nate.

When Lee was 17, she met Tim Herrmann, a high school jock and local heartthrob. She was visiting his house with her parents for a Memorial Day dinner. When Tim walked up the stairs and Lee saw Tim, the first things she noted were his blue eyes and broad shoulders. She thought, “Oh, he’s cute!” Tim thought, “She’s gorgeous!” He was captivated by her eyes. It was love at first sight. They dated for two years— to the jealousy, Lee once noted, with just a touch of glee, of many girls in school who wondered who’s the chick who stole Tim’s heart.

Lee and Tim married on June 17, 1978, at Woodland Shores Baptist Church in Bridgman, Michigan. Just as she had always dreamed of as a little girl, she slipped on her mother’s long-sleeved satin wedding dress, which fit her perfectly. That day, she peered into the church hall, saw the crowd gathered there, and gripped the arm of her father, freaking out. Her father prayed with her to calm her anxiety and lo and behold, she made it down the aisle, beaming like an angel, to stand next to Tim— and has stood by him for 43 years since, through every kind of tears and laughter, disappointment and joy. They raised two boys— spunky, athletic red-haired TJ, who made Lee laugh out loud in stitches and sensitive blonde, David, who shares Lee’s tender heart.

Lee exemplified the noble woman in Proverbs 31. Never was there a day when she hasn’t said, “Busy day today!”— because she made herself busy, whether tending to her beautiful roses in the garden, repainting the kitchen cabinets, redecorating the whole house, creating sentimental scrapbooks for her sons and grandchildren, making cards for friends, or praying for someone in need. She baked an orange crunch cake that was a hit at every dinner party, owned countless cake plates and tea sets, and filled a tall cabinet with beautiful jewelry, mostly gifts from Tim who spoiled his wife as any proud husband would.

She was a wife who comforted, gladdened, and strengthened her husband; a mother who sent daily emails to her sons and always picked up the phone no matter when they called; a grandmother who loved baking with her granddaughter Madyson and watching her grandson Jaxon play baseball; a mother-in-law who loved her sons’ wives as though they were her own daughters. She was also a daughter who was her parents’ pride and joy, a sister who glued the family together and a friend who blessed everyone around her.

Lee had a gentle and unassuming presence, but her nature was so beautiful, so pure and so heartwarming, that her departure leaves a giant hole in the heart of every single person who knew her, for as long as until they join her in the arms of Jesus.

Her mother, Ruth Potratz and sister, Eloise Potratz preceded her in death.

To order memorial trees or send flowers to the family in memory of Leora Herrmann, please visit our flower store.