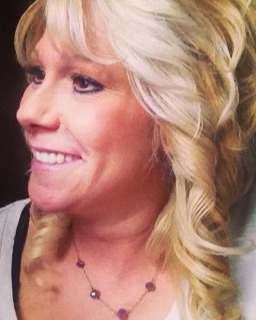 She was a mother, daughter, sister, aunt, niece, cousin, and friend. But most of all, she was a kid at heart.

Leslie was born on September 21, 1971, to Rita Johnson and Dennis Stebner in Beach, North Dakota, and was raised with sister, Lynnette and brother, Eric Stebner. Leslie had three amazing children. Daughter/best friend, Sheree, son, Cole, and daughter, Taeya. Leslie's eyes lit up when she spoke of each of her children. They were her pride and joy.

Though Leslie was a girly girl with her glittery and hot pink outfits, she was also a tomboy who was brave and athletic. She loved softball, basketball, fishing, and would rather have been in a muddy truck than a fancy car. Her happy place, when she wasn't with her cat Abbie or nestled in warm blankets (which did smell of Downy), was on a four-wheeler with mud up her legs, and blonde hair blowing in the wind.

Leslie was best known for her character as a selfless goofball. She was a comfort to those in need and made each person's day better with her outgoing laugh. She would give you the jean jacket off her back or the last five dollars in her pocket. She would make you giggle until your stomach ached, take you for cookies in the snowy parking lot, and share all her sweet or savory snacks. On top of that, she always had a kind word to say about others.

She was preceded in death by grandparents, Loretta & Lawrence Zwinger, and Otto & Ida Stebner; and uncles, Richard Zwinger and Bob Weber.

Our hearts are shattered; she is deeply missed.

But Jesus called them to him, saying, “Let the children come to me, and do not hinder them, for to such belongs the kingdom of God” -Luke 18:16

To order memorial trees or send flowers to the family in memory of Leslie L. Danielson, please visit our flower store.