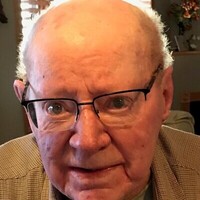 Leslie “Les” C. Sayler, Bismarck, passed away July 17, 2022. A memorial service will be held 10:30 a.m. Wednesday, July 27 at First Lutheran Church, Mandan. Family will greet guests one hour prior at the church.

Burial will be held at Immanuel Lutheran Cemetery, New Leipzig.

Les was born on March 10, 1922, to Magdalina and Carl Sayler in Oregon City, Oregon. He grew up in the Bentley-New Leipzig area. Les retired from Western Steel and Plumbing in 1982. After retirement, he spent his time volunteering, delivering meals on wheels, helping at Aid, Inc., and helping wherever he was needed. In 1995 Les was awarded the outstanding Senior Citizens Award that made him very proud.

Les married Darlene Krogh on April 19, 1979, and they made their home in Mandan.

In lieu of flowers, memorials may be sent to First Lutheran Church, Mandan, or the Dakota Boys and Girls Ranch, Bismarck.

To order memorial trees or send flowers to the family in memory of Leslie Sayler, please visit our flower store.