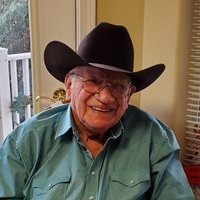 Lloyd Miles Benz, 91, died Aug. 24, 2021 with his wife, Virginia, and family at his side. Mass of Christian burial will be held 10:30 a.m. Monday, Aug. 30, at Cathedral of the Holy Spirit, 519 Raymond St, Bismarck, with the Rev. Joshua Ehli officiating. Private burial (due to space limitations) will be at the North Dakota Veterans Cemetery, south of Mandan, at 2 p.m. Visitation will be held from 6 p.m. to 7 p.m. on Sunday, August 29, at Cathedral of the Holy Spirit, Bismarck, with a rosary and vigil service at 7 p.m.

Lloyd was born on April 5, 1930, on the Benz Ranch south of Moffit, ND, to Miles and Beatrice (Hardland) Benz. He and his sisters grew up on the ranch and later moved to Abercrombie, ND, and then Christine, ND, where he graduated from high school.

After high school, Lloyd moved to his uncle Clarence Schmitz’s farm south of Menoken, ND, to work as a ranch hand. Those of you who knew Lloyd and his cousin, Larry Schmitz (Schmitty) can imagine the stories from the time they spent together. It was during this time he met Virginia Heaton, the youngest of four sisters and a brother, on the Heaton farm south of McKenzie, ND.  Lloyd and Virginia were married August 18, 1951, at St. Hildegard’s Catholic Church in Menoken, ND. Lloyd loved Virginia with his whole being, and thought she was the most beautiful woman in the world until the day he died.

Lloyd enlisted in the U.S. Army in 1951, during the Korean War. He departed for Japan from Seattle, WA, on the USS Randall troop transport, and traveled for 13 days to Japan, where he was stationed and served in radio and communications. He was honorably discharged in 1953.

Lloyd lived life to the fullest and most often by his own rules. He carried this quote in his billfold for many years: Life’s journey is not to arrive at the grave safely in an attractive, well-preserved body, but rather to skid in sideways, thoroughly used up, totally worn out, shouting, “Holy sh__ – what a ride!”

Lloyd said this spring he wanted to make it until August 18 because he promised “Ma” they would celebrate their 70th wedding anniversary, and he delivered.

To order memorial trees or send flowers to the family in memory of Lloyd Miles Benz, please visit our flower store.