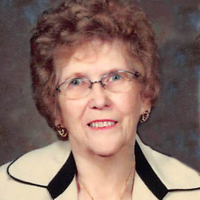 Visitation will be held from 5 to 7 p.m. Friday at the church.

Loretta was born on September 1, 1932 in Bantry, N.D., to Albert and Lola (Michals) Benjamin, the fifth of seven children. When she was young, the family moved to Minot.

She met Henry “Hank” Vannett through a cousin and they were married on August 30, 1957 in Minot. Together, they raised four children. In the early 60’s, the family moved to Mandan and later settled in Bismarck. She was a stay at home mother and cared dearly for her children. When Loretta drove her children to school, she was known to take the scenic route and make the trip adventurous.

Loretta was a peanut brittle expert and always gave a container full to family for Christmas. She was an excellent baker and always had a two-week supply of banana bread in the freezer ready to be handed out to family.

She was a Minnesota Twins fan and never missed a game on the TV. She shared this bond with her grandson, Trevor, and sister, Lucille. Her husband is a Yankees fan and every Twins vs. Yankees game it was tradition between the two to bet a dollar on who wins. Needless to say, Loretta was usually a dollar richer after the end of the game. Loretta enjoyed reading and playing pinochle and dominoes. For those that knew Loretta would remember that she was always dressed to the nines.

Loretta was a founding member in the United Methodist Women and continued to stay active throughout the years.

To order memorial trees or send flowers to the family in memory of Loretta Vannett, please visit our flower store.