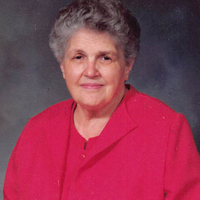 Visitation will be held from 5 to 7 p.m. Monday at Parkway Funeral Service, 2330 Tyler Pkwy, Bismarck. A Vigil service will begin at 7 p.m.

Louise (Senn) Schmidt was born May 28, 1924 to John and Eleanora (Derschan) Senn on a farm north of Mott.

She married Lawrence Schmidt on May 5, 1947 in Mott. Together she and Lawrence had two children, Mary Lou (Dave) Holliday and Larry (Pat Mayer) Schmidt; a granddaughter, Tanya Holliday; and two great-grandsons, Dalton and Ryker Holliday.

Louise and Lawrence operated The Pheasant Lounge, The Poolside and the Riverside. Louise also worked as a bookkeeper at the Mott Supply Store. She began her career as a teller at the Commercial Bank of Mott and remained there for 51 years.

In 2007 Louise moved to Minot to be closer to family and remained there until recently. She was transferred to Missouri Slope where she resided until her passing.

Louise was preceded in death by her husband, Lawrence; parents; sisters, Ann, Francis, Helen and Louisa; and brothers, John, Vince and Victor.

To order memorial trees or send flowers to the family in memory of Louise Schmidt, please visit our flower store.