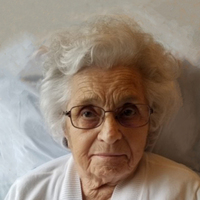 Visitation will be held one hour prior at the church.

Following the service the family invites you for lunch and fellowship at the church. After lunch the family will depart at 1:30PM for a brief graveside service at the Wishek St. Luke Lutheran Cemetery. There will be a gathering at 4 p.m. at the Wishek Senior Citizen Center with a light supper following.

Luella (Meidinger) Foerderer Davis was born in a sod house overlooking Beaver Creek in South Central North Dakota about 11 miles north of Zeeland. The 3rd oldest of 12 children, she lived there until the age of 14 when she moved a couple of miles north with her parents. They now had a good house with floors and an upstairs.

She met her husband, Ed, at a dance in Zeeland and was married on November 18th, 1941. They lived with Ed’s parents, operating a crop and dairy farm and raising a family of five sons. She lost her first born, a daughter, when she was  9 months.

A petite, hardworking, courageous and humble woman, she addressed each day with the tasks at home. Nothing was too much for her as she was always able to accomplish what needed to be done for the day, no matter what was thrown at her. She was an amazing cook, seamstress and farmer’s wife and no one ever walked away from her table hungry. Her Christian upbringing and faith helped her through her hardships and only made her stronger and more enduring. In her life cleanliness was next to godliness.  After the death of Ed in 1976, she moved into the city of Wishek for a few years and then moved to Bismarck in 1980.

She married Delton G. Davis in February of 1984 and began a new life of traveling, along with helping her children and grandchildren whenever they needed. She was, with the help of family, able to live at home until September 10th, 2021. She never wanted to live with the “old people.” Now resting in the Lord until resurrection day and we shall meet again.

She was preceded in death by her daughter, Eunice; Edward Foerderer, Delton Davis, two daughters-in-law, Linda and Lorraine and seven brothers and sisters.

To order memorial trees or send flowers to the family in memory of Luella Foerderer Davis, please visit our flower store.