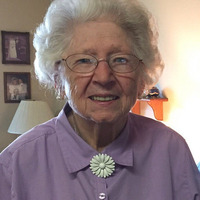 Lydia Walker, 99, passed away on Dec. 12 at Edgewood Village, Bismarck. Funeral services will be held 1 p.m. Wednesday, Dec. 16, at Parkway Funeral Service, 2330 Tyler Pkwy, Bismarck. A service livestream will be available on the funeral home’s website, listed below.

Lydia was born on June 8, 1921 to Andrew and Lydia (Schweigert) Huber in Watauga, S.D. She grew up poor on her parents’ farm and attended rural school near Watauga.  The land on the farmstead was poor for farming so they later moved to McIntosh S.D. where they were able to obtain better land. Shortly after moving, her father passed away leaving her mother and her siblings to operate the farm.  With the loss of her father to run the farm, they purchased a dairy where they milked cows and sold milk, cream, butter, and other dairy products under the name of Huber’s Milk-E-Way Dairy.

At a church function in McIntosh, Lydia caught the eye of Samuel Walker from Selfridge.  Sam was friends with Lydia’s brother Philip and Sam convinced Philip to arrange a date for him with Lydia.  Although Lydia was at first reluctant, she eventually agreed and their relationship grew from then on.  Unfortunately, World War II broke out and Sam was sent overseas for several years.  When the war was coming to an end, Sam was able to get a furlough and came home to ask Lydia to be his wife.  On Aug. 26, 1945 Lydia married Sam on the Walker’s family farm near Selfridge, N.D.  Sam then returned to Florida where he was stationed for a short time awaiting his discharge from the Army.  Lydia was not able to join him right away as her mother gave permission to her to marry Sam on the condition that she stayed home until after harvest.  Once harvest was finished, she boarded a train bound for Florida to join Sam until his discharge.  In 1945, they returned to Selfridge to take over Sam’s family farm, the same farm where they were married.  There they raised crops, cattle, and their four children. Sam passed away on June 13, 1982. Lydia continued to live on the family farm until 1990 when she moved to Bismarck.

Lydia was an excellent cook and baker, and would often make homemade kuchen, bread, buns, doughnuts, and other baked goods.  She was also a wonderful seamstress and gardener making many of the clothes for her family and growing much of the food for family meals.

Lydia was preceded in death by her husband; her parents; all her three sisters; all her seven brothers; and all her in-laws, making her the last of her generation.

To order memorial trees or send flowers to the family in memory of Lydia Walker, please visit our flower store.