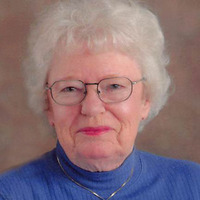 Marian Thea (after her Norwegian grandmother) Martin was born on April 26, 1922. She died March 5, 2021. She never warmed up to her middle name.  Marian graduated from Bismarck High School in 1940.  In the early years of World War II, she worked as a telephone operator, working the switchboard, for Northwestern Bell.  She knew the telephone numbers of virtually every resident in the city.

On Jan. 27, 1944, Marian married Charles Kapsner.  They were married for seventy-six years. After brief stays near Ft. Riley, Kansas, and Tacoma, Washington, they returned to Bismarck – permanently.

Marian was a very private person.  Outside her immediate family she socialized very little.  She worked hard, both outside the home and inside. She performed, or tried to perform, most home maintenance until she and Charles moved to Edgewood Village in 2017.  After returning to Bismarck, Marian worked for Commercial Service, briefly for the short-lived Bismarck office of General Electric, and then for many years  the Bureau of Unemployment Compensation.  She was the most “advanced” woman in the office.  There were no female officers, no female directors, and no female supervisors.  One of her job responsibilities was to train her male supervisors – none of whom had experience in the agency. She trained three of them.  Her ceiling was not glass.  It was concrete.  Recognizing her actual ability, her last supervisor finally convinced the director to make her a claims examiner, which was her position when she finally left the Bureau.

Marian never did what she wanted to do until she had completed what she needed to do.  Perseverance. And she had a profound sense of right and wrong.  She was usually able to forgive bad behavior, with the exception of those who turned the old, but beautiful, Carnegie library on Sixth Street and Thayer Avenue into a parking lot.  To call her a voracious reader would be a vast understatement. She never bought books. She checked them out of the library --  thousands of books – every week or two from about 1930 until 2019. Then she read books from the library of her son and daughter-in-law. By the early 1980’s she was on her second time through the fiction section alphabetically.  She didn’t read every book, but every book that looked even marginally interesting to her. She checked out six to ten books at a time in order to find three or four she hadn’t already read (it took about twenty pages to know). Marian finished her last book five days before she died.  Toward the end, she seemed to read more for peace of mind than comprehension.

Marian was preceded in death by her husband, Charles Kapsner; parents, Casey and Lillian (Hanson) Martin; and her sister, Florence Magallon.

A graveside service will be held 11 a.m. Wednesday, March 10 at the North Dakota Veterans Cemetery, south of Mandan.

To order memorial trees or send flowers to the family in memory of Marian Kapsner, please visit our flower store.