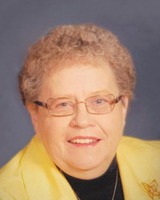 Burial will be held at 1:00 PM, Friday, at the North Dakota Veterans Cemetery, Mandan.

Marilyn was born on June 5, 1942, in Hunter, ND to Merlin and Violette (Flatt) Grage. She grew up and attended school in Hillsboro, ND.

Marilyn was united in marriage on October 1, 1966, to Jesse Brandner in Hillsboro. After their marriage and over the years they moved to various cities with Jesse’s job. Marilyn was a great wife and soul mate to Jesse, and they never spent much time apart. After Jesse retired in 1993, they lived in Hillsboro before moving to Bismarck in 1999.

Marilyn loved baseball as well as other sports, and she especially enjoyed  watching the Twins. Marilyn was very involved at Shepherd of the Valley Church since moving to Bismarck, and she considered them all her family.

She was preceded in death by husband, Jesse; sister-in-law, Sandy Grage; and nephew, Kim Brandner.

A special thank you to the Gietzen family, Daryl Brandner, and her church family for all the love and support they showed Marilyn over the years.

To order memorial trees or send flowers to the family in memory of Marilyn Brandner, please visit our flower store.

Shepherd of the Valley Lutheran Church