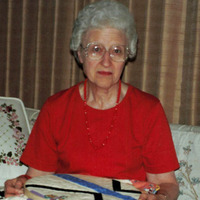 Burial at the North Dakota Veterans Cemetery Mandan, where her husband is laid to rest, will be at a later date. No funeral services will be held.

Marilyn was born with her twin sister on October 3, 1930, in Crete, the daughter of Frank and Stella (Holecek) Palensky. She graduated from Oakes High School in 1948 and received a Bachelor of Science degree in Education in 1960 from Normal & Industrial College in Ellendale. She continued her education, receiving her master of science degree in education from Northern State College in Aberdeen, South Dakota.

Marilyn taught at six North Dakota schools including Ransom Co., Verona, Doyan, McClusky and Monango, including 29 years in Edgeley for a total of 40 years of teaching, retiring in 1991.

She traveled many times to Phoenix, Arizona, and Ketchikan, Alaska, to visit her sisters. Out of country travels included New Zealand, Australia, Russia, Canada, Puerto Rico, Panama and many European countries, including the Czech Republic – the homeland of her grandparents. She made many of her clothes and enjoyed music and reading.

Marilyn was married to Ralph V. Feltis in April 1954 in Stirum. Ralph “Sam” passed away in 1981. Other family preceding her in death are her parents; sister, Darlene Sveum; twin sister, Madalyn Palensky; and grandson, Lee Feltis.

Many thanks to the staff at The Terrace in Bismarck, nurses and doctors at Sanford Hospital, Bismarck, and friends and family for their assistance during these difficult times. She will be missed.

To order memorial trees or send flowers to the family in memory of Marilyn Feltis, please visit our flower store.