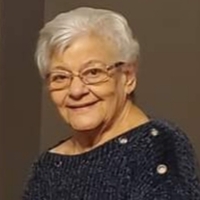 Marilyn Schlafman, 85 formerly of Florence, Arizona, passed away peacefully April 3, 2021 at the home of her daughter in Mandan. A celebration of life will be held from 12 to 3 p.m. Saturday, June 5  at Parkway Funeral Service, 2330 Tyler Pkwy, Bismarck.

Marilyn was born February 2, 1936 in McClusky ND to George Franklin and Myrtle Helen Skaff.  She married Eugene “Gene” Schlafman on February 23, 1954 in Little Falls, MN.  They had four daughters and lived in Bismarck until 1974 when they moved to Detroit Lakes, MN to own and operate North Shore Resort.  Marilyn was employed by the State of North Dakota as a computer programmer for nine years until they moved to Minnesota.  In addition to the resort, she also worked for the Detroit Lakes Public Schools Administration office.  She transferred to the D.L. High School in 1977 to work in the guidance office with students.

Marilyn and Gene retired in 1997 to enjoy the motor home life and traveling they dreamed of.  They were drawn to Caliente Senior Park in Florence, Arizona as a permanent residence and purchased a park model home there. They enjoyed socializing with the many friends they made there. Marilyn also volunteered at the club house library and was actively managing it for many years. She was also very involved with Meals on Wheels in the Florence area.

As a loving mother and grandmother, she never missed a birth of her grandchildren. Every baby received a handmade quilt and crocheted baby blanket made with all her love and she continued the crocheted blankets for all her great-grandchildren. Marilyn loved spending time with her grandchildren taking them fishing. She was an excellent hostess and cook and loved to entertain her family and many friends in Bismarck, Detroit Lakes, and Caliente. Her specialties were Lebanese and German heritage foods. Many happy memories were made in her home around the dining room table.

She is preceded in death by her beloved husband, Eugene; her darling daughter, Jacqueline Mann; her precious granddaughter, Ginger Rohde; her son-in-law, Alex Hager; brother-in-law, Bruce Bakeberg; nephews Raymond and Gary Stubson; her father and mother George and Myrtle Skaff and numerous brothers and sisters-in-law.

To order memorial trees or send flowers to the family in memory of Marilyn Schlafman, please visit our flower store.