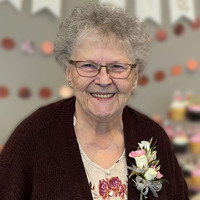 Marjorie (Heiny) Johnson, 80, passed away on Thursday, February 3rd, 2022 with her family by her side at Sanford Medical Center in Bismarck.

A Mass of Christian Burial will be held at 11 AM, Friday, February 11 at St. Michael Catholic Church, 106 2nd Ave, Herreid SD, 57632. Visitation will be held one hour before.

Marjorie was born on October 28th, 1941, in Green Bay, WI, the daughter of Marion and Ida (Kostka) Heiny.

On February 1st, 1964 Marjorie married Johnny Johnson and they had six sons.

They moved to Pollock, SD in 1976. Marjorie was an excellent cook and baker. She co-owned The Fin & Feather and later opened up her own café. After those adventures she continued to cook at The Pollock Café, Nutrition Site and West Pollock Resort. She was also active in various groups in the community.

Marjorie stayed in Pollock until 2020 when she moved to Bismarck.

Marjorie was preceded in death by her parents; three brothers, Marion, Ronnie and Roger Heiny; one sister, Mary Ann Langkamp; her husband, Johnny; and her son, Craig.

To order memorial trees or send flowers to the family in memory of Marjorie "Heiny" Johnson, please visit our flower store.