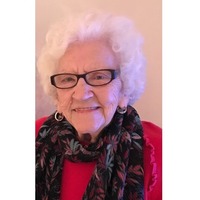 Marjorie Mae Bohn was born June 14, 1924, on the family farm near Hurdsfield to Anton and Thora (Westvold) Bohn. She was baptized and confirmed in the Hurdsfield Lutheran Church.

She attended rural school and graduated from Hurdsfield High School in 1941. She worked for her brother-in-law Garel Evans, in Grand River, Iowa. She was also employed at the Federal War Price and Rationing Office in Fessenden.

She married Richard Thorne September 3, 1944, in the Bowdon Lutheran Church in Bowdon. They lived in Fessenden and Bowdon until moving to Bismarck in 1959. They owned the Thorne Confectionery in Bowdon before morning to Bismarck. She and Richard had two children: Margo and Larry.

Marge was employed at Bismarck State College for 22 years before retiring. She was a member of Royal Neighbors of America since the age of 17.

She was an excellent cook and baker. Her family was treated to many caramel rolls, orange drop cookies and pies.

She loved to play cards and she was out to win. She taught each of her grandkids and great grandkids to play Gin 13, her favorite.

Grandma Marge, you truly were a gem!  Godspeed.

To order memorial trees or send flowers to the family in memory of Marjorie Thorne, please visit our flower store.