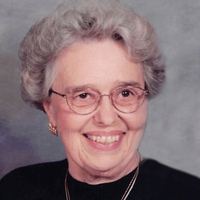 Visitation will be held from 2 to 4 p.m. Sunday at Parkway Funeral Service, Bismarck.

Marlys was born on Oct. 20, 1930 in Steele, the last daughter of Otto and Alena Thorsness and lived on a farm NE of Tappen. She attended a one-room schoolhouse two miles from the farm and graduated from Tappen High School.

She moved to Jamestown and worked for White Drug. Marlys married E.R. “Buck” White in 1951 and moved to Steele. Buck and Marlys raised five children while she was a stay-at-home mother.

Marlys helped Buck at Farmers & Merchants for years and in 1983, she began working for Kirschenmann Insurance, which then became known as Bowerman Insurance. She retired at age 74.

Marlys enjoyed attending her children’s extracurricular activities, bowling, coffee time, square dancing and collecting OJ figurines and Snow Village Christmas décor.  Decorating her home for Christmas was always one of the highlights of her year.

She entered the Golden Manor in November 2016 where she resided for four years.

She was preceded in death by her husband, Buck; her son, Kim; her parents; all 11 siblings and their spouses, Stan, Sid, Glady, Ruth, Haven, Wally, Diley, Allen, Dorothy, Buddy, and infant sibling, Thomas.

To order memorial trees or send flowers to the family in memory of Marlys White, please visit our flower store.